After finding a familiarity with my work schedule, school sessions, coworkers, and friends it feels like I’ve made Turks and Caicos my new home for my short time here.

The Youth Rugby season is in full stride now. Six teams have been made while more children are joining. I have taken the initiative of finding locals businesses to sponsor the teams so that the children have nice jerseys to play in and involve the community in Youth Rugby. We have many children of different ages, so the scoring is a little different to encourage more passing. Children under 10 score 2 points, over 10 is one point and girls are worth three points. The rugby sessions at the school have been successful with recruiting even more children to the club teams. Teachers have also asked me to schedule more sessions, so now I am getting members of the men’s team to help me when I am double or triple booked.

One weekend, we hosted two international over thirties men’s teams to come play a friendly tournament. We invited locals to watch and support the teams, and children came to watch to get their first taste of full contact rugby. The two teams came from Atlanta and Bermuda. The matches were very exciting to watch, and it was great to see children cheer on their dads, whereas it the opposite at Saturday Youth Rugby, dads cheer on the children.

Other weekends featured local teams playing Rugby Sevens in preparation for the tournament in Trinidad. I was asked to play to fill up the team rosters, and I agreed. I only previously played fifteens, but the faster pace in sevens was very exciting and exhausting. In the second match, I managed to run by my defender resulting in a try, which was the biggest thrill.

The Rugby Tag League season has picked up and the games are getting more competitive and intense. A different point scoring is in place. Men under thirty score 1 point, men above thirty score two points, over 50 score 3 points, and all women score three points. So far, my Unicorns team is building good team chemistry and has a winning record and may have chance to make the playoffs.

Hurricane Matthew was a big concern for many island countries in the Caribbean. When Turks and Caicos was on hurricane warning, I had to ask everyone how and what to prepare in case the hurricane did make its way towards us. I had to stock up on non-perishable food, just in case we lost electricity and wouldn’t be able to leave the house. Luckily, we were only touched by the outside of the tropical storm zone of the hurricane, and only experienced rainfall and strong winds for one night. The next morning life on the island resumed like nothing had happened.

My parents have decided to surprise me and visited me for a week. Somehow they managed to find a townhome 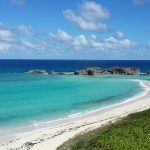 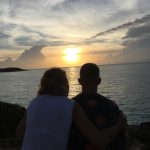 Watching the sunrise with my parents 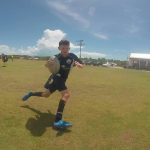 that was walking distance to the rugby field and the office. Though, I have only been in Turks and Caicos for a  month, I felt as though I was a tour guide for my parents and had so much knowledge and expertise. They spent their time going to beautiful sites, like the mangroves, Iguana Island, North and Middle Caicos as well as parasailing. We have been indulging the local cuisine and enjoying all the different conch dishes.

At the beginning of October, I began assisting Keith with training the National Women’s Sevens Team in preparation for the Rugby America North tournament in Trinidad & Tobago. By the end of the month, I was leading the trainings on my own. Some of the girls misheard my name when I first introduced myself, and now I am stuck being called “Coach AJ”, which is fine with me. The ladies on the team also felt as though their fitness needs to be improved so now we have Saturday morning fitness training. With Trinidad fast approaching the teams are becoming more focused and thrilled. From what I have been told the Men’s and Women’s teams have never looked better, so expectations are higher than ever. My excitement for the RAN Sevens Tournament grows every day.